After 11 public meetings, height of proposed towers on Lexington Rd have not changed 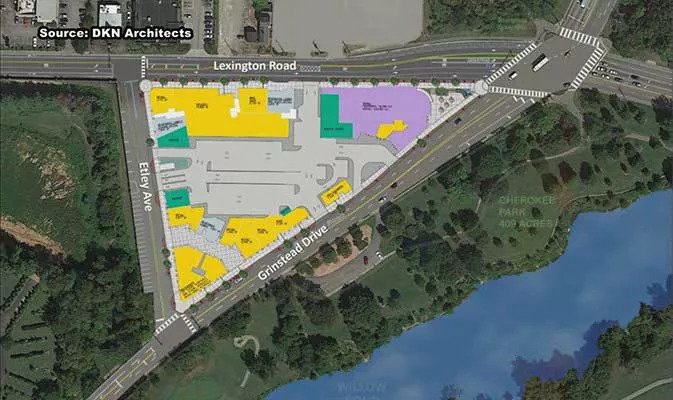 LOUISVILLE, KY (WAVE) – A development group showed the public its final proposal for several mixed-use high rise structures
near the intersection of Lexington Road and Grinstead Drive in Louisville.

Public meetings on the development have been going on since 2016. During the last of the meetings, on Wednesday, June
27, many were disappointed at the final proposal.

The 3.3 acre property would include a mix of residential, retail, and hotel space.

The renderings of three towers — which are 34, 33, and 28 stories tall — sparked concern for many residents.

“From my back window I will see this looming in my horizon every day,” Laurel Wasz, a Cherokee Triangle resident,
said. “I do not want that. Fredrick Olmstead is rolling in his grave.”

Wasz said the three sky scrapers and contemporary glass is a stark contrast to its surrounding. The site is sandwiched
between Cherokee Park and Cave Hill Cemetery.

“For them to tell us this will not affect traffic is utter nonsense,” Wasz said. “We live here we see the traffic
every day and it’s already bad.”

Bill Bardenwerper, representing JDG, said the project adds 283 vehicles in the morning peak hours and 252 in the evening.
KYTC has approved a double left turn lane onto Grinstead Drive from Lexington Road.

“The fact that there have been 11 public meetings does not mean it has been approved,” Metro Councilman Bill Hollander
(D-District 9) said.

Hollander said once a formal application is submitted, JDG’s proposal will be reviewed by various city agencies. Even at
that point, he encourages his constituents — both in favor and opposed — to remain vocal.

“Attend the public meetings and let your voice be heard,” Hollander said.

Over the last 11 meetings, some really hoped the size of the towers would shrink. They have remained the same. JDG will
turn their plans over to the city on July 11.

The owner of JDG is Kevin Cogan, who is the brother-in-law of WAVE 3 News Anchor Shannon Cogan.