Are you ready for a 35-story building near Cherokee Park? 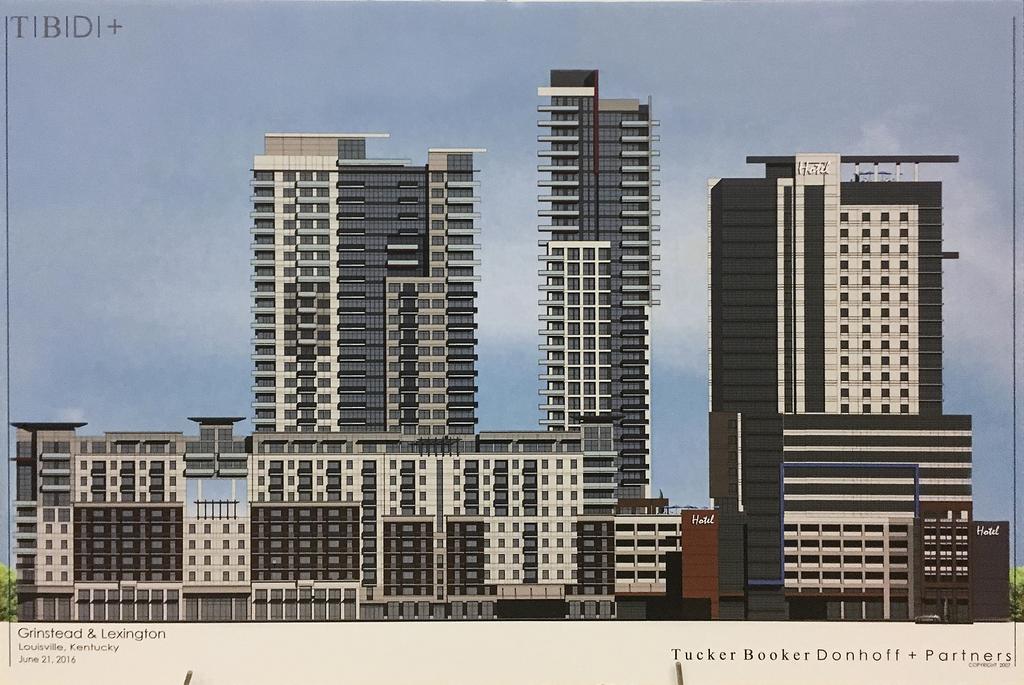 Clifton resident John Pacyga said those who live in the Grinstead Road corridor sometimes feel disconnected from downtown and that the area could use a new development that could serve as a gateway for people who exit Interstate 64 at Grinstead Drive.

At the meeting point of Grinstead and Lexington Road, Pacyga said, motorists are met with a hodgepodge of businesses with no central focus, and he called the intersection an eyesore.

So Pacyga sees opportunity with a new project proposed by Louisville development firm Jefferson Development Group that would completely transform that triangle into a mixed-use development with a hotel, apartments, retail and office space.

“It brings downtown a little closer,” Pacyga said of the proposed project. “It doesn’t seem so far away. “

Robin Donhoff, CEO of Louisville architectural firm Tucker Booker Donhoff+Partners, presented an early rendering of the plan, showing that it would include a cluster of attached buildings making up one huge structure with two residential apartment high-rise buildings and a large hotel.

Donhoff said that, as designed, the project would have more than 700 apartments and about 250 hotel rooms.

One of the more eye-popping elements of the design is the height of the high-rise buildings, the tallest of which could be 35 stories, based on the preliminary rendering. That’s taller than the Omni Louisville Hotel, which has been proposed at about 30 stories, and rivals the size of the city’s tallest downtown buildings.

A design charrette differs from a typical neighborhood meeting because it serves as a collaborative workshop between developers, architects, designers and affected residents to discuss plans and focus on possible tweaks to the design before it enters advanced planning stages.

The charrettes also are a required part of the planning process from Louisville Metro Government, and they will continue tonight and tomorrow with Crescent Hill and Cherokee Triangle residents.

Although Pacyga showed interest in the project, the mood surrounding the project was decidedly mixed as a small but vocal crowd expressed concerns regarding traffic impact, stormwater runoff, sanitary sewer capacity, access points to the project and building materials that will be used.

Cogan was absent from Monday’s charrette, which was led by local zoning attorney Bill Bardenwerper and Donhoff.

The total square footage for the project was not disclosed at last night’s meeting.

Bardenwerper said the project could accommodate a small grocery store along with other retail uses Cogan has already announced, including upscale steakhouse Le Moo, a Parkside Bikes location and a store for Kenzie Kapp, a Louisville designer who makes and sells Derby-style hats and fascinators.

A planned six- or seven-story parking garage would wrap around the interior of the complex, topped with a rooftop courtyard and garden area that would help with stormwater runoff but also have community space and possible retail elements, such as a cafe, Bardenwerper said.

Cogan told Louisville Business First in December that the project could cost $200 million to $400 million.

He has been actively collecting properties in the triangle for the past few years, spending nearly $4.3 million to purchase five plots. He already had owned a property in that triangle — a vacant commercial property at 2501 Grinstead Drive — since 1993.

Cogan added to that collection in August, when Jefferson Development Group bought the property at 2338 Lexington Road for $1.5 million from multiple owners. That site is currently home to a Speedy Mart, and Cogan has said the gas station and convenience store will remain in the space until its lease ends at the end of the year.

Most of those in attendance Monday night live in the Irish Hill neighborhood and said they were concerned about the impact the project could have on traffic. Several residents pushed for multiple entrances with one primary entrance, possibly off Etley Avenue.

Bardenwerper said the developers are still working on traffic flow surrounding the project, but he said it likely would have secondary entrances.

And Donhoff said service bays would be established off the roadways so large trucks would not bog down traffic while making deliveries.

Others were hesitant about the sheer size and density of the project because it would dwarf any other buildings in the area.

Lisa Dettlinger, an Irish Hill resident of three decades, noted how close the project is to Cherokee Park and warned of possible pushback from park-area residents who don’t want the park’s serenity to be disrupted.

Other concerns raised centered on the style of the design, which some felt does not match the look of the Cherokee Triangle area, comparing it with the 800 apartment tower downtown. Bardenwerper said traditional building materials will be used, such as brick and limestone, but modern flourishes also are planned.

Residents in attendance last night asked for more clarity regarding how the project scales when placed beside neighboring properties. They also requested renderings that show sidewalks and greenspace.

Cogan likely could make good money by maintaining the properties and collecting rent from existing businesses, Bardenwerper said, but his goal is to “do something spectacular” and assist those who want to be closer to the urban core.

“People are wanting different things,” Bardenwerper said. “They want to get close, they want to live in buildings that have an entire environment in them.”

Cogan has had controversial developments in the past. Willow Grande, a 15-story luxury condominium high-rise proposed by Cogan in the Cherokee Triangle neighborhood, has been tied up in a legal battle for years because of its size.

Bardenwerper said information gathered from this week’s design charrettes will be reviewed, and another design meeting will be scheduled later to discuss findings.