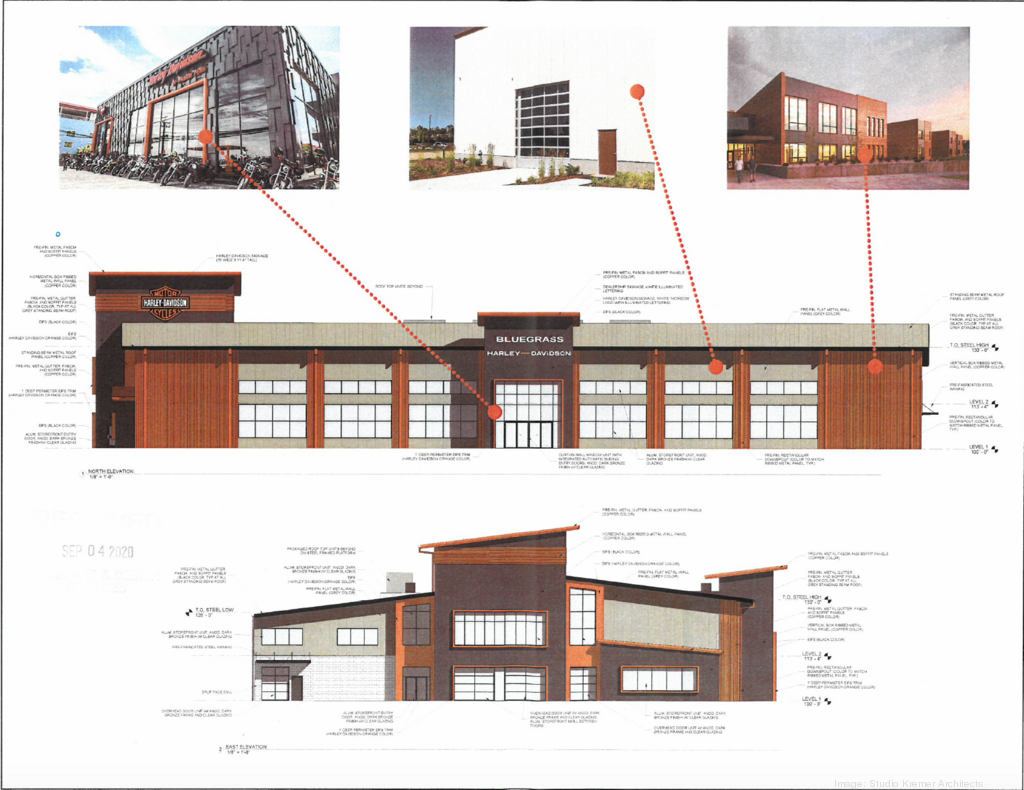 This article was written by Marty Finley and originally appeared in Louisville Business First on September 9, 2020.

Bluegrass Harley-Davidson plans to relocate its Louisville dealership from 11701 Gateworth Way, at Blankenbaker Parkway and Interstate 64, to a larger facility on a 4.3 acre site along Terra Crossing Boulevard inside Cogan’s development, which is located on 100 acres at 13508 Factory Lane.

Schipper anticipates the facility employing between 50 and 60 workers — an increase of about 20 staff members.

Cogan’s company, Jefferson Development Group, purchased this land from The St. Joseph Catholic Orphan Society for $11.87 million in summer 2017. JDG had the property under contract for more than a year as it worked through the planning stages of a large mixed-use commercial and residential village concept that has been estimated to cost $200 million or more. Hundreds of apartments are being located alongside other commercial uses, including offices and retail, at the development.

Bluegrass Harley-Davidson sells new and used Harley-Davidson motorcycles and vehicles, including electric, off-road and three-wheeled vehicles, Schipper said. The dealership also offers parts and accessories for the maintenance and customization of the vehicles to match the rider’s preferences and personality. And it sells riding gear and clothing that he said appeals to riders and non-riders alike.

“We actually have a lot of folks come in and just buy the clothes because (they think) they’re cool,” he said.

The dealership will feature a facility to repair and service Harley-Davidson vehicles as well as a riding academy to teach riders safe techniques. Schipper said the riding academy will include a classroom and an outdoor training course to the north of the dealership facility.

The company also hosts fundraisers to raise money for various local charities and plans to continue that at the new dealership.

“Covid this year has made that challenging, but once we get past Covid we’ll be doing a lot more,” Schipper said of the facility’s charitable work.

He hopes to break ground by year’s end in order to be open by around November 2021. The company’s investment in the project has not been finalized as it is still sorting out the building plans and architectural design.

“It’s a growing area, and the development and everything that has gone on there at Old Henry made it a good choice,” Schipper said of the site. “With all the road changes being done around the I-265 corridor, I think we’re going to see a lot more traffic go that way around town.“

Schipper was originally targeting the former home of Malibu Jack’s, which occupied a roughly 87,000-square-foot building, for this new dealership.

Earlier this summer he filed plans with Louisville Metro Government to rezone that property at 12101 Sycamore Station Place from the multipurpose PEC zoning district to the C-2 zone. But he withdrew that proposal and resumed the search for a new location after the corporate offices of Harley-Davidson declined to approve the former Malibu Jack’s site for the new dealership.

Once completed, Bluegrass Harley-Davidson will join a number of other commercial developments along the Old Henry Road corridor, such as the new Mercedes-Benz of Louisville dealership, Galen College of Nursing’s new headquarters and campus, a new Marriott Hotel and a multi-phase luxury apartment complex that Cogan has said will cost more than $100 million, among several others.

“We are excited to work with the Schipper family on this new chapter for Bluegrass Harley-Davidson. Our team of Jefferson Development associates have truly enjoyed helping Evan and his father, Paul, plan, design and build their vision,” Cogan said in a statement. “Harley-Davidson brings another national and iconic brand name to our development.”