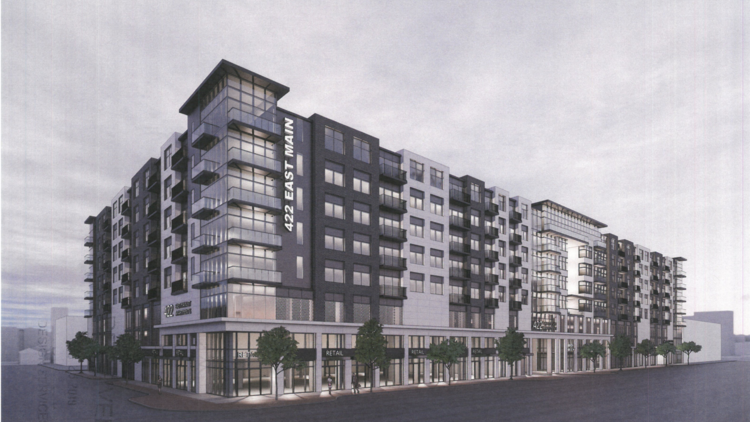 This article was written by Marty Finley and originally appeared in Louisville Business First on November 10, 2020.

Cogan’s Jefferson Development Group has requested a new partnership with the city on its 422 e-Main project at 418 E. Main St. and 431 E. Market St. that would provide 80% of the incremental increase in ad valorem real property taxes associated with the project to JDG for up to 25 years.

The amount of taxes generated for the developer under this tax increment financing district, or TIF, would be capped at roughly $7.6 million, according to documents filed by JDG with Louisville Metro Council. The other 20% in increased ad valorem taxes generated would go to the city.

Cogan proposed this project more than a year ago with 343 apartments, approximately 11,360 square feet of ground floor retail and restaurant space and a parking garage.

Louisville Business First reported last year that the complex would exceed 650,000 square feet. JDG has owned the property, a downtown parking lot, through an affiliate for more than a decade.

The TIF proposal is set to go before the Metro Council’s Labor and Economic Development Committee at 3 p.m. Tuesday, Nov. 10, Metro Council spokesman Tony Hyatt said. If it passes out of committee, Hyatt said the proposal would move on to the full Metro Council at its Nov. 19 meeting.

I have reached out to Cogan for comment on the TIF proposal and this story may be updated.

A detailed development plan filed by JDG with the city states the project will offer high-quality amenities, and it will represent an $80 million investment, including $65 million in hard construction costs.

“The project will provide an updated urban housing option for Louisville Metro, catering to professionals and families desiring an urban lifestyle, as well as baby boomers and ‘empty-nesters’ seeking an urban retirement experience that allows opportunities and ease of access to arts and cultural attractions downtown,” the plan states. “The redevelopment plan for the project will redevelop a site that has been underutilized and under maintained.”

As part of its proposal, JDG has agreed to rent 34 of the units at no more than 80% of area median income and will make “good faith efforts” to rent those units to income eligible individuals. JDG has not disclosed potential lease rates or a development timeline for the project yet.

“Areas with a concentration of urban residents become true communities, and serve as a draw for the development of restaurant, shopping and entertainment venues. By providing an attractive, exciting place to live, the project will reinforce the ability of private and public employers to recruit young professional and creative people to Louisville Metro in general,” JDG stated in the development plan. “Many of Louisville Metro’s peer cities are experiencing substantial growth in downtown housing and employment as a result of the creation of urban living spaces. Memphis [Tennessee], Nashville [Tennessee], Indianapolis, Charlotte [North Carolina], and Raleigh [North Carolina] all serve as examples of this evolution.”

JDG adds that Downtown Louisville has the employment base and the growing restaurant and retail base to support this type of urban living.

“This project will serve as a catalyst for more urban residential development,” the plan states.

Cogan is one of the most well-known developers in town for the ambitious nature of his projects, including the Willow Grande condo development in the Cherokee Triangle area and the One Park mixed-use development at Lexington Road and Grinstead Drive, planned for 18 stories tall.