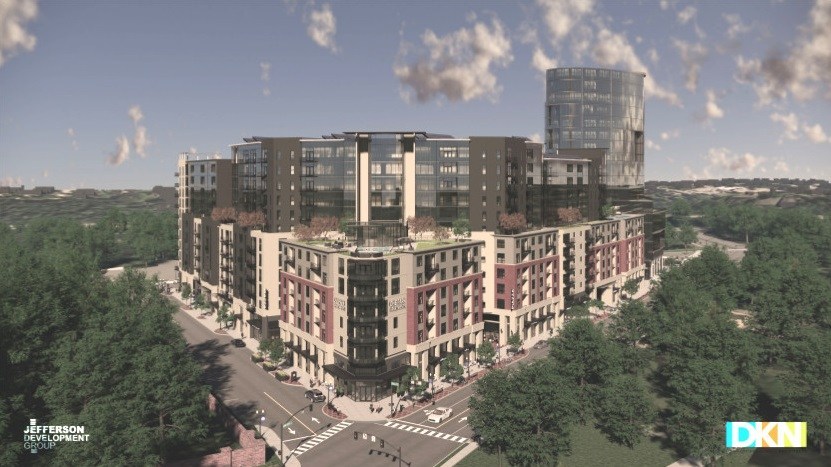 This article by Kevin Gibson originally appeared on insiderlouisville.com

The developers of One Park, the mixed-use project planned for the corner of Grinstead Drive and Lexington Road, unveiled a vastly reduced new plan Tuesday night at a 12th and final public hearing that in spite of a rainstorm was attended by well over the expected 100 people.

The response was mixed, with people speaking up for and against various aspects of the project by Kevin Cogan’s Jefferson Development Group. But one of the long-criticized aspects of the development – its elevation – is drastically reduced in the plan revealed Tuesday night.

The newest design eliminates two of the three tall towers, and the one remaining, which originally stood at 34 stories from ground level, has been reduced to 18. Part of the change includes a reduction of more than 100 hotel rooms and a reduction of 160 condo/apartment units. In addition, a planned office building has been eliminated, although the possibility remains that a proposed hotel in the development could become offices.

Retail space was expanded by more than 8,000 square feet, while parking has been reduced by nearly 600 spaces in conjunction with the occupancy reduction.

One result of the changes is that the developer’s revised traffic study shows a reduction of 25 percent in morning peak hour traffic impact and 23 percent during peak evening traffic, with small increases from those projections by 2021.

Bill Bardenwerper, the attorney representing Cogan, led the presentation, revealing new renderings along the way. At one point, architect Rob Donhoff, of DKN Architects, showed a flyover effect animation to help meeting attendees visualize the size and dimensions of One Park, which retains its “layer cake” design that is inset above the first six floors to reduce the feel of a skyscraping development from street level.

In addition, the second level has been lowered by 15 to 20 feet from previous designs and the tower vastly reduced, which Donhoff told the room, means “the overall effect of this is dramatically different.” He said the tower ultimately will have the effect of a mid-rise, versus a high-rise, and one of the goals was to connect the development to nearby Cherokee Park for pedestrians.

Still, several who spoke were concerned about various aspects of One Park, from the sidewalk easement to the size. One person asked if the neighboring Cave Hill Cemetery had chimed in with the developers.

Bardenwerper replied with one of a handful of the meeting’s light moments, saying Cave Hill is “aware” of the project’s details, adding, “But I haven’t heard anything specifically from anyone living.”

Traffic was perhaps the most-questioned topic, with several people concerned the addition of so many condos and apartments, plus retail ranging from shopping to restaurants, might clog up the already busy intersection.

One gentleman wondered how, during rush hour, someone might turn left onto Grinstead from One Park, declaring, “They can’t do it!”

Others, however, spoke enthusiastically in favor of One Park. One man, who described himself as a 35-year-old Irish Hill resident, said he was “a young person who wants the city to do something” with that long-unused property.

Another man, who thanked the developers for listening to the public, called the nearby 1400 Willow condo complex a “crowned jewel” of the area – drawing groans from many – and noted that when that development was proposed, it was similarly “hated.”

Bardenwerper – who commented at one point that Tuesday’s meeting was the first with “sustained positive input” — noted that the point of the public hearings was so that Jefferson Development Group could build something that would be embraced by the neighborhood, saying the series of hearings was done “not because we had to have 12 meetings, but because we wanted to have 12 meetings.”

By around 8 p.m., the rain having passed, people began shuffling out of the meeting, which started just after 7 p.m. The fate of the project now will be in the hands of the city, as the developers have said Tuesday night’s was the final presentation to the public before beginning the process to obtain building permits and to get approval of final plans.