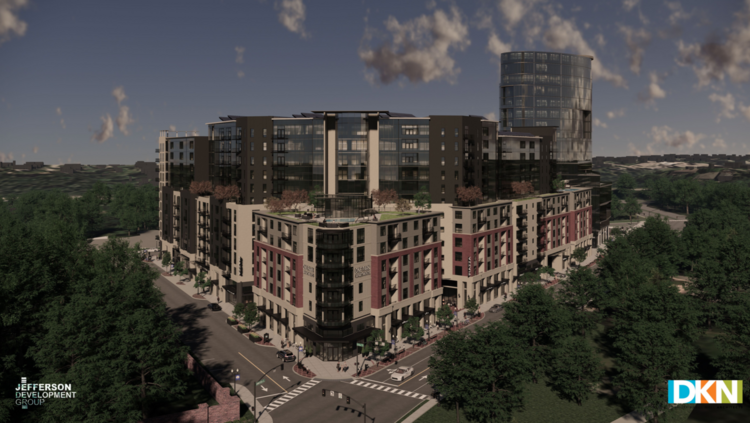 The One Park development at Lexington Road and Grinstead Drive is taking the next step toward final approval.

Louisville Metro Council’s Planning and Zoning Committee voted Tuesday to move the case to the full Metro Council. It will address the controversial mixed-use development on Thursday, Dec. 12. The request includes a zoning change for the roughly three-acre site from C-2 to a planned development district.

Today’s committee vote followed One Park’s approval by the Louisville Metro Planning Commission in October after a lengthy public hearing at the Kentucky International Convention Center. More than 70 people spoke at that meeting — a mix of supporters and opponents.

One Park is the creation of longtime Louisville developer Kevin Cogan of Jefferson Development Group and would include an 18-story tower with 421 apartments; a luxury-branded hotel with up to 250 rooms; and tens of thousands of square feet of restaurant and retail space, including a possible grocery store. The plan also calls for about 1,200 parking spaces in an interior parking garage.

While some of the planning commission did voice concerns that One Park could make traffic worse at the intersection of Lexington Road, Grinstead Drive and Etley Avenue, those worries did not outweigh the positives they felt the project brings to the city.

Councilman Bill Hollander, who lives near the proposed One Park site, was the only council member to speak at length during Tuesday’s committee meeting, saying he will vote yes next week. Hollander criticized the series of One Park design meetings held by Cogan’s team as flawed and non-collaborative, but he said the current state of this property is underutilized and unattractive.

The One Park proposal, he said, is a more appropriate use. And while he has some concerns about increased traffic, he said he has not heard any real rebuttal to the developer’s traffic study.

“This is something we should be encouraging, not discouraging,” Hollander said. “… Higher density is essential to creating lively places with lots of amenities.”

Cogan has said he envisions residents of One Park enjoying the retail amenities on site and taking ride sharing services to and from work every day.

“It’s a really great signal for the city of Louisville to embrace density and infill,” he said.

One Park started out with three towers — the largest being 34 stories tall. Cogan revised the plan earlier this year after concerns were persistently raised about its height. The new proposal eliminated two of the three proposed towers and trimmed the remaining tower to 18 stories.