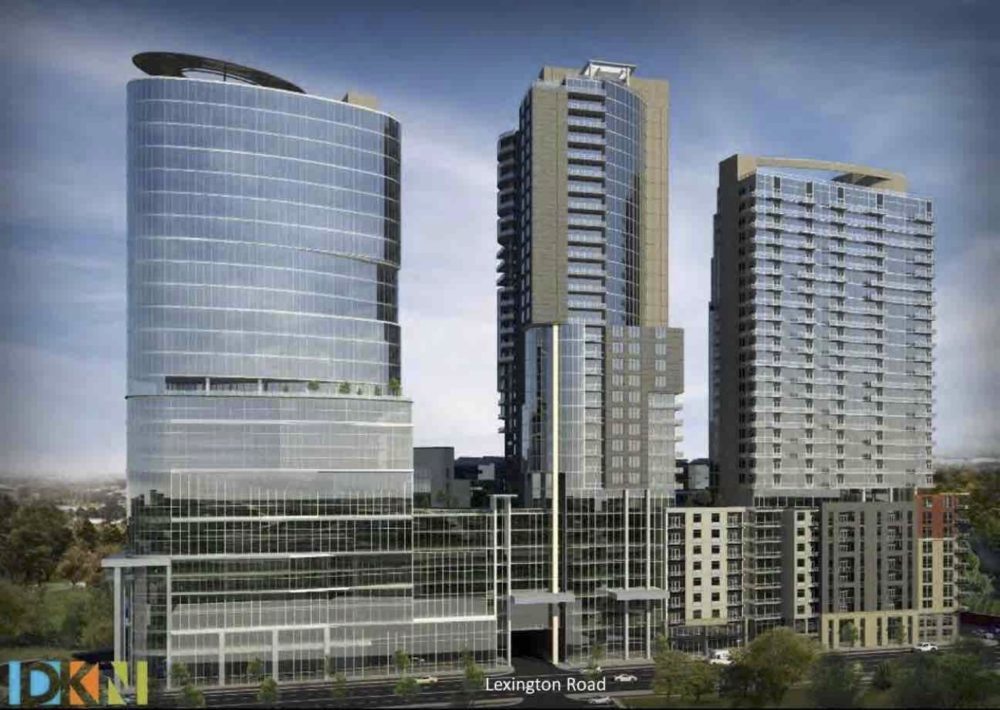 The team behind the developer Kevin Cogan’s proposed multimillion-dollar project across from Cherokee Park tweaked plans for the mixed-use development in the hopes of satisfying residents’ concerns about its height, density and design. One big thing that didn’t change is how tall it could stand.

The latest development renderings elicited wows and groans from the crowd of roughly 75.

“It did not look like you paid attention to the height being the real obstacle. It looks like Singapore,” said Jan Calvert, who lives less than a mile away from the site. She added that it looked like the development team did make some changes in response to criticism, but the density was still too high.

The new statistics for the project include 40,936 square feet of retail and 65,216 square feet of office space, a decrease of just under 20,000 square feet total. The most recent plans also call for a 299-room hotel (up from 285 rooms), 581 apartment units and/or condominiums (a decline from 743 units) and 1,788 parking spaces (up from 1,698) in a garage that will be wrapped in residential and commercial space.

Bardenwerper noted that a building at Grinstead Drive and Etley Avenue would stand six stories tall compared to a previous height of 11 stories. Plans still call for three towers of office, retail, hotel and residential development with the first six stories abutting the sidewalk; the remaining floors would be set back. The tallest building would reach no higher than 34 stories.

“A lot of time and effort was spent on that because there was a lot of insistence,” he said of the design changes. “The sense you will have at some spots from the sidewalk is of a six-story building,” not a tall tower.

During his presentation, Bardenwerper also noted that intersections would have painted pedestrian crossings and a second left turn lane from Lexington Road onto Grinstead Drive would be added to keep traffic flowing toward the Interstate 64 interchange.

Despite the changes, some attendees expressed their continued displeasure, saying the development would ruin the ambiance of the surrounding neighborhoods and Cherokee Park and bring increased traffic. While a few expressed disdain, a number of people said they are happy that some type of development is planned for the site and liked aspects of it but said the height and density are not right for that spot.

Others spoke in favor of the project, indicating that it would attract young professionals from other cities and keep others from moving.

One attendee noted that Cherokee Park was designed by Frederick Law Olmsted, who also designed Central Park in New York City, which is surrounded by high-rises. Another said that those who oppose the project are taking a “not in my backyard” attitude.

Bardenwerper said the development team expects to file plans with the Metro Planning & Design Services as early as July 9 to start moving forward with the formal public hearing and approvals process.