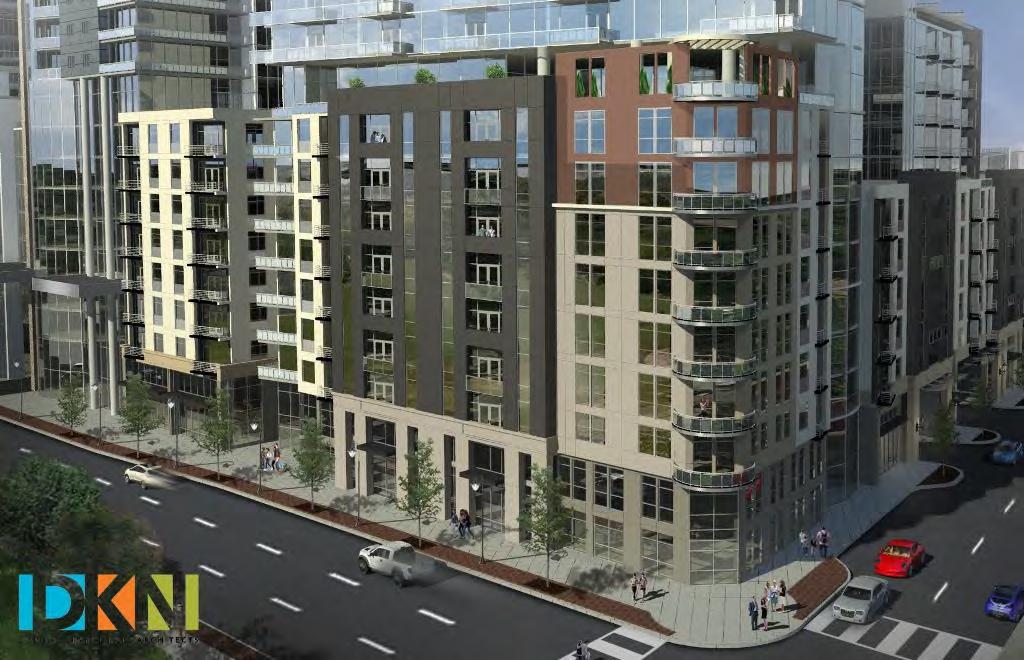 The Louisville development firm led by Kevin Cogan released the most detailed look yet at its controversial high-rise project that has been under development for years at the triangle of properties it owns at Lexington Road, Grinstead Drive and Etley Avenue.

The new renderings were released during a final neighborhood meeting Wednesday at the Girl Scouts of Kentuckiana, where neighbors continued to express concern and fears about the height of the complex and its impact on traffic. The project will include three apartment, condo and hotel towers at different heights, with the tallest standing at 34 stories under the latest proposal.

The hearings are known as design charrettes as Cogan’s firm, Jefferson Development Group, and his design team take input from those who live in the Crescent Hill, Cherokee Triangle, Irish Hill neighborhoods and the Lexington Road Preservation Area.

The plan’s commercial uses have been tweaked since the design meetings started during the summer of 2016, but the height has remained — to the consternation of the project’s detractors. JDG now plans to file its official plans with the city in the next few weeks. That filing will start the rezoning process, which will trigger public hearings by the Louisville Planning Commission.

The latest design of the project, which is expected to cost more than $200 million, calls for 581 apartment and condo units, 299 hotel rooms, 65,000 square feet of office space, nearly 41,000 square feet of retail space and almost 1,800 parking spaces in an internal parking garage that would be invisible to the public.

Some of those numbers have been scaled down. In October, the project called for nearly 750 apartment and condo units and about 158,000 square feet of office space.

Bill Bardenwerper, a Louisville land use and zoning attorney who represents Cogan’s firm, said that under the newest proposal, he expects about 870 people would live in the complex’s apartments and condos, the price of which have not been finalized. Bardenwerper also expects most of the apartments and condos to be on the high end, but he said a component of affordable housing could be required by the city for the plan to gain approval.

JDG proposes a building with only six stories at the corner of Grinstead Drive and Etley Avenue and step-backs for the high-rises so passers-by won’t be looking up at boxy, monolithic towers.

From the transportation side of things, JDG is exploring the possibility of new traffic signals at the intersections of Lexington and Etley and Grinstead and Etley.

A traffic study conducted for the project estimates that the development would add fewer than 300 vehicles at the Lexington and Grinstead intersection during both the morning and evening peak hours.

The 3.3-acre property is now a hodgepodge of small businesses, including upscale steakhouse Le Moo, Fante’s Coffee and Nu Yale Cleaners, most of which are expected to be part of the new development. Parkside Bikes previously had a store there as well.

But feelings about the complex remained mixed. Most neighbors at the meeting admitted that some redevelopment is needed for this site, BUT they said Cogan’s project is excessive and could detract from the beauty of Cherokee Park and surrounding areas.

“It feels suffocating to see these tall, tall buildings so close to Cave Hill Cemetery,” one attendee said.

But Bardenwerper countered that the site in its current form is the Wild West from a development perspective, and Louisville has a chance to capitalize on an opportunity that other cities already have embraced, adding that status quo is not the answer here.

“Is Louisville truly ready for a visionary project that is going to drastically change the community?” he asked.

Others spoke out in favor of the plan, with one attendee saying he temporarily moved away from Louisville because he didn’t see the bold development and ideas embraced by other cities. The man went on to say that Louisville is spending money to educate students, then shoving them out of the community because they see an unwillingness by other residents to grow and adapt.

The project also has been hailed by many in the Louisville business community as a progressive step that better positions Louisville to compete with peer cities.

Chandler Bainter, an Irish Hill resident, has been one of the most vocal detractors of the project and again called out Cogan, who does not attend the meetings, for failing to listen to those who say they are open to a development but appalled by this project’s height.

“He doesn’t give a flip,” Bainter said.

JDG President Erica Hodge defended Cogan and his vision for the site, saying he wants to give back to the community as he has with other local developments.

“We stand by the project,” she said. “We feel the project is needed in Louisville, and we think this is the perfect location.”