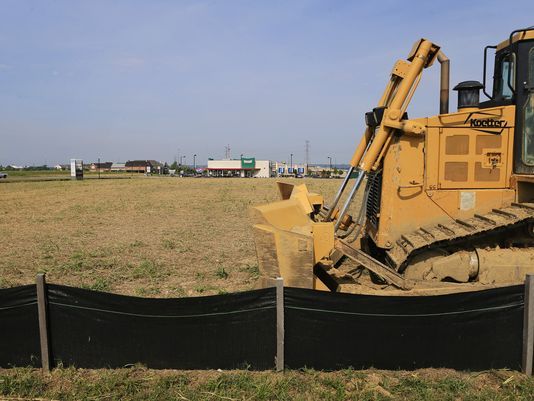 This article was written by Sheldon S. Shafer and originally appeared in the Courier Journal.

Developer Kevin Cogan’s company plans a large development along Factory Lane just outside the Gene Snyder Freeway that would include apartments, a senior facility, offices and retail and commercial uses.

Cogan has a contract to acquire the 107-acre site just north of Old Henry Road from the St. Joseph Catholic Orphanage Society.

A trust years ago left the Catholic organization about 230 acres in the 13500 block of Factory Lane.  The society recently sold 122 acres — or roughly the northern half of the property — to Ball Homes, which is developing a 405-lot subdivision.

Cogan’s zoning lawyer, William Bardenwerper, said Cogan now has agreed to buy roughly the southern half of the property.  The site under contract to Cogan’s group was where federal officials several years ago fleetingly considered constructing the Robley Rex V.A. Medical Center replacement hospital — a facility now slated to go near Brownsboro Road and the Watterson Expressway.

Cogan and his Jefferson Development Group filed documents last week with the Metro Department of Planning & Design Services stating an intent to rezone the 107-acre site for a mixed-use project.   Cogan stated only that the plans call for apartments, a senior facility, offices and retail/commercial uses.  The filing didn’t suggest any specific square footage for each type of development.

But a preliminary plan shows the property being divided into at least 10 parcels, ranging from six to 15 acres.  Bardenwerper said the intent is to seek a flexible zoning category to be approved by the Metro Planning Commission and the Louisville Metro Council.

If the Planned Development District category sought on the entire 107 acres is approved, Cogan could later submit a detailed plan for each of the 10  parcels, with those details subject to review by the city planning staff.

A public meeting has been scheduled for Tuesday, March 29, at Community Presbyterian Church at 13902 Factory Lane at 7 p.m. to discuss plans for the site with neighbors and also to get their ideas on developing the property, Bardenwerper said.

Bardenwerper acknowledged that the Ball Homes plans for the single-family subdivision generated some stiff opposition last year.  It came from homeowners in Woodmont, Fairfield and Forest Springs, who expressed extensive concerns about some environmental constraints.

But Bardenwerper said opposition to Cogan’s project may be less strenuous, mainly because the 107 acres is not in close proximity to many high-end, single-family homes.   The property under contract to Cogan hugs the Snyder.

Cogan also intends to make some major road improvements, the chief of which would be extending Bush Farm Road through the 107 acres to connect Old Henry and Factory Lane.

Cogan, doing business as Triangle Partners LLC, also has acquired the strategic triangular parcel bounded by Lexington Road, Grinstead Drive and Etley Avenue near I-64 and Cherokee Park, where he plans two high-rise residential towers.   The Le Moo restaurant will be included in the project, and the city recently issued a building permit to convert a former Brakeway shop in the triangle into a 1,950-square-foot fitness center.