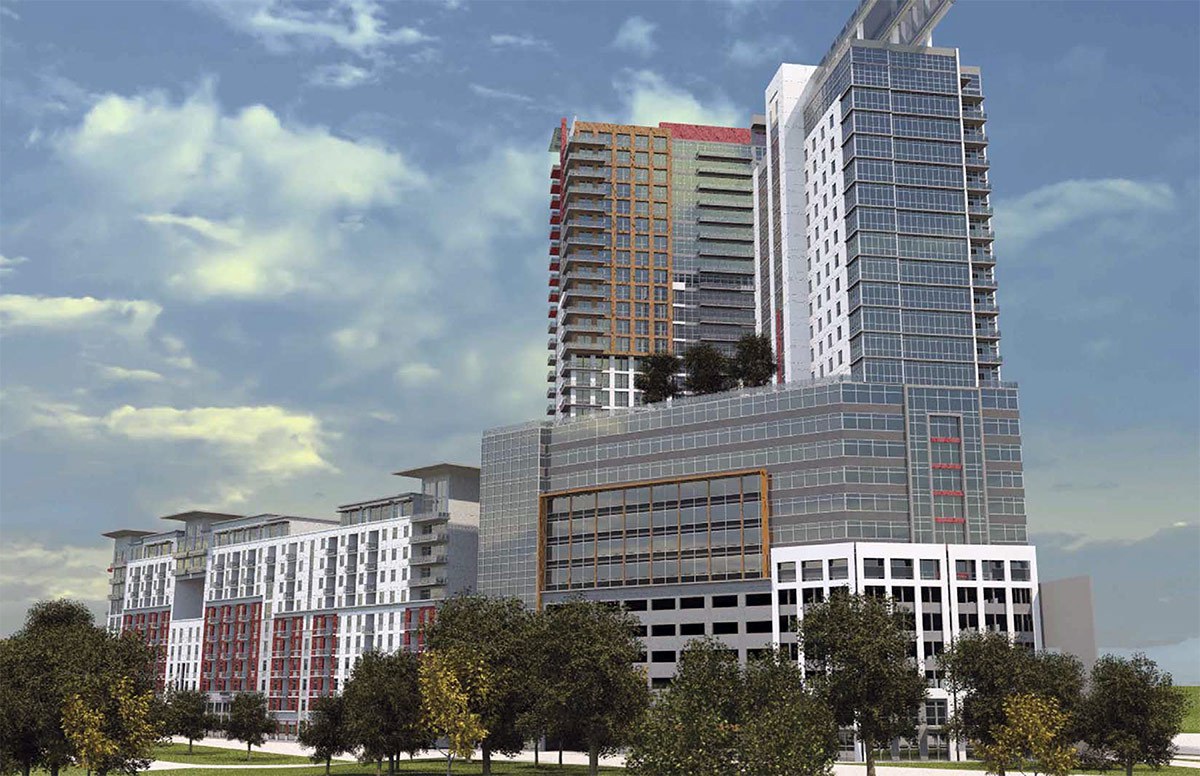 Louisville developer Kevin Cogan intends to turn a series of properties at Lexington Road and Grinstead Drive into one of Louisville’s largest and most significant mixed-use developments in the city’s history. And with a hotel and office complex, two high-rise condominiums, a retail and apartment center all planned on about four acres, his aim might be on target.

In discussing the project during an interview earlier this week, Cogan noted that Fourth Street Live in downtown Louisville brought in restaurants and retail options but never fed those businesses with a residential component. He plans to do both here.

It will be at least two or three years before construction could start. But plans show that, with a projected cost of $200 to $400 million, the complex could rival the nearly $300 million Omni hotel in price and scope.

As we reported this time last year, Cogan spent nearly $4.3 million to purchase five plots in the Lexington Road and Grinstead Drive triangle through his company, Jefferson Development Group. He already had owned a property in that triangle — a vacant commercial property — at 2501 Grinstead Drive, since 1993.

Cogan added to that collection in late August when Jefferson Development Group bought the property at 2338 Lexington Road for $1.5 million from multiple owners. That site is currently home to a Speedy Mart. Cogan said the gas station and convenience store will remain in the space until its lease ends at the end of 2016.

At that point, Cogan said, he will look for a new use for the space, not ruling out the possibility of a fast-casual restaurant with an outdoor beer garden.

Cogan plans to remove all of buildings in the triangle eventually and to construct a new development that would include an eight- to 10-story structure with apartments and retail. The first two floors of that building would house as many as 10 retail tenants in spaces of 1,500 to 20,000 square feet.

Floors three through six would likely include a parking garage, with residential apartment units wrapped around it and on the upper floors as well.

Cogan has developed an early sketch of the complex, which also would include two high-rise condominium buildings that would stand behind (and dwarf) the retail and apartment complex. He showed me the sketch during a meeting Tuesday morning at Panera Bread in the Highlands. (Unfortunately, he said he could not share a copy of the sketch with the public just yet.)

He said the retail complex would be attached to the condominiums by a promenade with an outdoor park and garden area.

Another piece of the mammoth complex would be a hotel and office complex. Nothing has been finalized on a hotel flag.

Other key details are still undetermined. For instance, he said he did not know yet how many apartments and condominiums the project will have. He also is not sure how tall the two condo buildings and the hotel will be, and he does not have a total square footage estimate yet.

He projects it will take about five years — barring legal challenges and other delays — to construct the development across multiple phases.

While many details of the project remain foggy, Cogan said he is starting to get his hands around the retail aspects of the development.

He is lining up retailers to occupy temporary space and eventually move into the fully developed complex.

“We wanted to make the area more attractive” as the new development works through the design and planning stages, Cogan said.

Restaurateur Kevin Grangier is one expected tenant. He transformed the former KT’s Restaurant & Bar in the triangle into an upscale steakhouse called Le Moo, and Cogan said Le Moo would be one of the major retail tenants in the new complex. (Le Moo’s current building and the others in the triangle all would be razed.)

Also, Parkside Bikes owner Ben Botkins added a second location in the triangle, at 2509 Grinstead Drive, in June, and Cogan said Botkins has expressed a desire to move into the new development.

Behind the bike shop, Cogan has renovated a building and signed a lease with Kenzie Kapp, a Louisville designer who makes and sells Derby-style hats and fascinators. That shop should be open in early 2016, Cogan said. Renovation costs for the 2,000-square-foot building were about $150,000.

Cogan also has negotiated a deal to bring a national retailer into the former Brakeway site at the corner of Lexington Road and Etley Avenue. He declined to identify the retailer because he has not finalized lease terms.

“All of these tenants that are signing (here) are doing it based on (the fact) that they want to transfer into the new development,” he said.

He said expects the the Nu Yale Cleaners on Grinstead to stay in the triangle and could potentially be part of the new development, and he is looking to bring a coffee shop to a former salon space, now vacant, at the corner of Grinstead and Etley.

Cogan said Louisville is still recovering from a difficult economy that saw virtually no new apartment or condo product hitting the market for years.

Now, apartments are springing up everywhere, but he said this development will fill a niche, providing top-class condominiums and apartments in a spot he said he has been looking at for decades.

Cogan said some who know about the development, including many Louisville executives, have asked him when the condos will be ready for purchase.

“The economy has been like a bear in hibernation,” he said. “When the bear sleeps for five years, it wakes up hungry.”