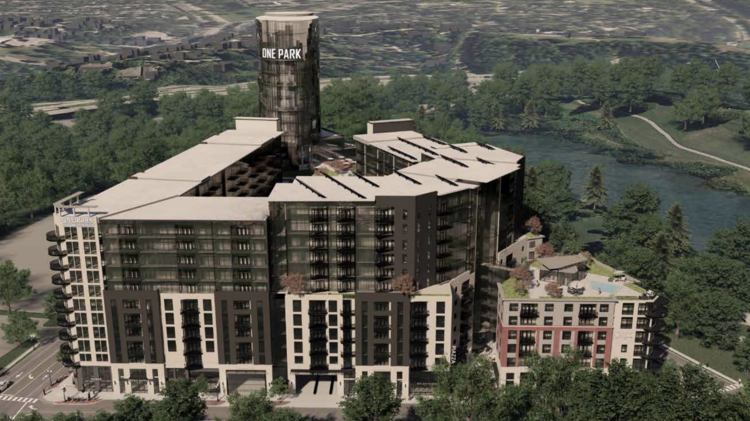 This article was written by Marty Finley originally appeared in Louisville Business First.

The Louisville Metro Planning Commission on Thursday approved development plans for the controversial One Park project.

The commission’s action comes after it approved a zoning change Thursday for the property at the triangle of Lexington Road, Grinstead Drive and Etley Avenue from C-2 to a planned development district.

The development now moves to Louisville Metro Council for consideration.

One Park is the creation of longtime Louisville developer Kevin Cogan of Jefferson Development Group and would include an 18-story tower with 421 apartments; a luxury-branded hotel with up to 250 rooms; and tens of thousands of square feet of restaurant and retail space, including a possible grocery store. The plan also calls for 1,202 parking spaces in an interior parking garage.

The planning commission continued the case for the roughly $250 million to $300 million mixed-use development after a roughly six-hour public hearing late last month at which it fielded testimony from dozens of people, both supporters and opponents, at the Kentucky International Convention Center. The meeting adjourned well past midnight.

During the public hearing, Cogan reluctantly agreed to make 5 percent of the residential portion of the project affordable housing, which comes out now to about 21 units. The city was pushing for 10 percent, but Bill Bardenwerper, the Louisville land use attorney representing Cogan, said they would only agree to that amount if the city says the project is eligible for tax increment financing.

Bardenwerper also promised that any hotel on the site would be special and different — more upscale than what is available now in Louisville. But the plan has the built-in flexibility to scale down the hotel, add more residential units or add in office space should the right hotel flag not be found.

The vote came after brief deliberations among the planning commission’s members, all of whom expressed support for the development with several saying it was a great reuse of an underutilized property.

While some of the planning commission did voice some concerns that One Park could make traffic worse at the intersection of Lexington Road and Grinstead Drive, those concerns did not outweigh the positives they felt the project brings to the city.

Cogan expressed gratitude with the vote and said this type of strong support sends a strong message to Metro Council. He said a lot of work is left to go, but he is eager to start discussions with council members about the plan.

Cogan said he envisions residents of One Park enjoying the retail amenities on site and taking an Uber to and from work every day.

“It’s a really great signal for the city of Louisville to embrace density and infill,” he said.

The project has attracted its share of both supporters and detractors. The supporters have pointed to One Park — alongside Topgolf at Oxmoor Center — as two projects that will show Louisville is open for business and willing to progress in order to attract young talent. Others pointed to the project site being an eyesore and in bad need of rehabilitation.

Greater Louisville Inc. has come out in favor of it.

“Greater Louisville Inc. is pleased to see that the One Park development was approved by the planning commission. For Louisville to compete effectively with its peer cities and to continue growing its economy, we need developments like One Park,” Sarah Davasher-Wisdom, chief operating officer and chief of staff for GLI, said in a statement after the vote. “This $250 million investment will transform an eyesore site as well as bring jobs, more housing opportunities, and new tax revenues to Louisville.”

But some opponents have argued that Louisville’s livability, comparatively light traffic and unique neighborhoods make it a great place to live, and giant developments like One Park could jeopardize that.

The public hearing was held more than three years after the first public meeting was scheduled for the complex, which started out with three towers — the largest being 34 stories tall. In all, about a dozen public meetings were held.

Revisions ultimately came after concerns were continually raised about its height, density and impact on traffic. The new plan eliminated two of the three proposed towers and trimmed the remaining tower to 18 stories.

Planning Commission Chairman Vince Jarboe said he believes the downsized plan is a good compromise and indicated the original proposal would have faced a much steeper road to approval.