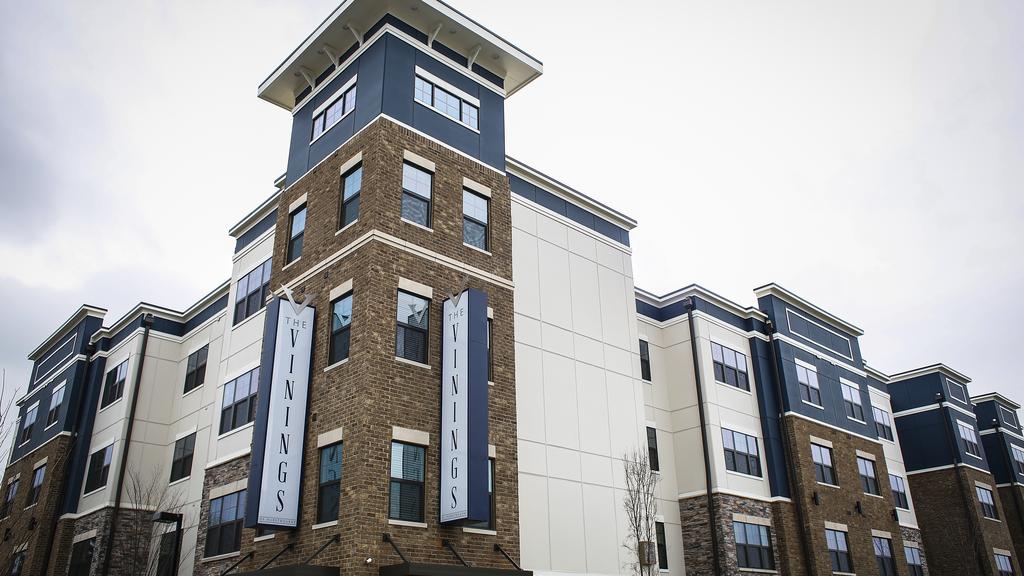 Kevin Cogan jokes that he wants to stay so low profile that he “blends into the dust,” but his projects are anything but low key.

Cogan, chairman and CEO of Jefferson Development Group in Louisville, met with me Tuesday morning to discuss a number of projects he has in the pipeline. During that discussion, he outlined his plans for the Vinings Development, an 11-acre mixed-use development along Williamsburg Plaza, South Hurstbourne Parkway and Whittington Parkway that has been under development for years.

The Vinings is home to a Panera Bread and office buildings at 9500 Williamsburg Plaza and 320 Whittington Parkway that house multiple companies, including the Long John Silver’s corporate headquarters, Swan Financial Corp. and Passport Health Inc.

Jefferson Development now is moving forward on a multi-family development that will build out nearly half of the remaining property.

Cogan said he wants to create an apartment community that he believes will appeal to older residents who want to downsize and young professionals who are settling in the Hurstbourne area because of new jobs coming online at the Shelbyhurst Office and Research Park.

That business park is being developed by Louisville-based NTS Corp. and the University of Louisville Foundation and is home to a number of companies, including Churchill Downs Inc. and Steel Technologies LLC .

Work began nearly a month ago on the 159-unit Vinings of Hurstbourne apartment complex, which Cogan is developing as part of a joint venture with Murfreesboro,Tenn.-based TDK Construction. TDK also is the general contractor for the project.

Cogan previously worked with TDK on the development of the Claiborne Crossing apartment complex near the Lake Forest development.

Cogan said the capital investment to develop the Vinings of Hurstbourne is about $26 million, and the units will be in three four-story buildings. He said there will be 50 to 60 units per building, and they will range in size from about 850 square feet to 1,100 square feet.

Rental rates were not immediately available.

The first of the three buildings should be ready for occupancy by summer 2016, Cogan said, and he wants to finish the final two buildings by fall of next year.

On-site amenities, he said, will include office and conference room space, a “social room” for parties and family events, an exercise facility and an outdoor pool. The buildings also will have elevators, which should assist older residents who may struggle with stairs, Cogan said.

Cogan said he believes the Hurstbourne Parkway corridor is in need of new housing stock with modern amenities and finishes. He said many people are looking to downsize and sell homes they may have owned for three decades but still want to be close to their favorite shopping and retail options in the Hurstbourne area.

Cogan originally partnered with Papa John’s International Inc. founder John Schnatter to develop the Vinings together, but Cogan said he has bought all the controlling interest Schnatter owned in the Vinings and now owns and controls the land inside the development.

Other work continues inside the development as a 2,500-square-foot Chipotle Mexican Grill is under construction across from the Panera Bread, at 500 S. Hurstbourne Parkway, and should be open by April, according to Cogan.

Looking ahead, Cogan said that about two acres at the Vinings, near the Chipotle, are still available for development. He said he is talking with parties who are interested in establishing another restaurant or hotel on that available property, but no deals have been finalized.