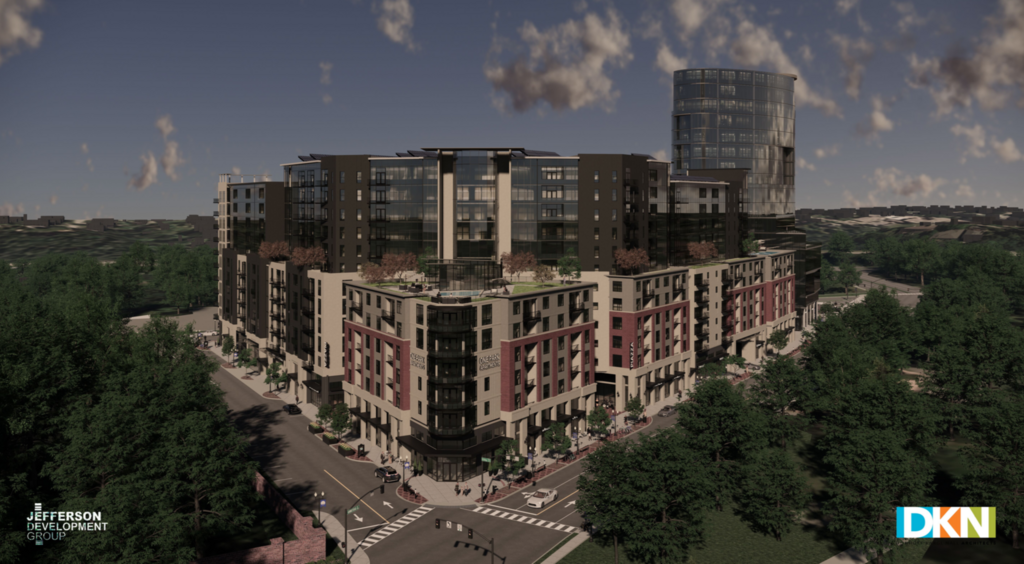 After four years of planning and revisions, the One Park development at Lexington Road and Grinstead Drive can proceed to final design and construction after a unanimous vote.

Today’s deciding council vote followed One Park’s approval by the Louisville Metro Planning Commission in October after a lengthy public hearing at the Kentucky International Convention Center. More than 70 people spoke at that meeting — a mix of supporters and opponents.

In its latest form, One Park will include an 18-story tower with 421 apartments; a luxury-branded hotel with up to 250 rooms; and tens of thousands of square feet of restaurant and retail space, including a possible grocery store. The plan also calls for about 1,200 parking spaces in an interior parking garage.

It also has remained controversial for its size, despite the fact that the original proposal of three towers — the largest being 34 stories — dwarfs the current plan.

Mayor Greg Fischer applauded the council’s vote in a statement.

“Thank you to Metro Council for voting to approve One Park. Higher density, infill projects like One Park will help our city create a more sustainable future. This project and others like it will help Louisville retain and attract more talent and continue our city’s momentum.”

Greater Louisville Inc., the metro chamber of commerce,. also celebrated the move in a statement.

These types of projects are critical for growth and attracting new businesses and talent. With One Park, we can position the Louisville region to meet market demands, promote more housing and walkable communities, and get the attention of site selectors.

It’s been a long journey for the project. Cogan first shared details of his plan in one of its earliest forms with Louisville Business First in late 2015. Roughly six months later, he shared a rendering of the massive complex during a neighborhood meeting at Louisville Collegiate School.

The project has since gained the support of groups like GLI, fellow developers and others in the business community, but it quickly drew the ire of nearby neighbors and area neighborhood associations who felt its colossal height and density would destroy traffic flow and disrupt the beauty of both Cave Hill Cemetery and Cherokee Park. In all, about a dozen public meetings were held.

Revisions ultimately came after concerns were continually raised about its height, density and impact on traffic. The new plan eliminated two of the three proposed towers and trimmed the remaining tower to 18 stories

Some supporters expressed disappointment that Cogan relented on the height, but most have stuck with him. Since Cogan downsized, members of both the planning commission and Metro Council have said the original plan would never have gained approval.

Under the old plan, total costs for One Park were between $450 million and $500 million, but Cogan told me earlier this year that he hopes to now be in the $250 million range. Bardenwerper said in April that Cogan wants to finish the project in his lifetime and wanted to see a plan approved by the city that does not end in a lawsuit and a lengthy legal appeal.

“This is what we’ve got to do to get this building built and occupied,” Bardenwerper said earlier this year. “… It’s just an easier project because it will have a lot more support.”