New designs unveiled for One Park project in Highlands 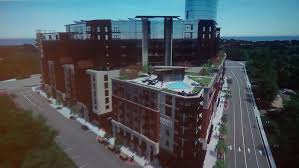 This article was written by Taylor Durden and originally appeared on wave3.com.

The developers of the One Park project, planned for the corner of Grinstead Drive and Lexington Road, met with neighbors Tuesday night to show them the new designs.

Original renderings of the mixed-use development had three towers, one of which was 34 stories high. Neighbors expressed their strong opposition to that design.

On Tuesday, developer Kevin Cogan unveiled a new design which eliminates two of the high-rise towers. It also lowers the one remaining tower to 18 stories.

Inside would be about 193 hotel rooms, 421 apartments and condos. The first floor would grow by 8,294 square feet from the previous proposal to accommodate retail shops and restaurants.

When developers showed the previous renderings Tuesday evening, it was met with a mix of booing and applauding. Several people opposed to the project spoke up about their concerns about the look of the building, the height and traffic.

Laura Wasz said she has been to all 12 meetings about the project and is still not happy with the changes the developer has made.

“We came here, we live here because we love the old buildings. We love the old structures,” Wasz said. “A development of this sort with a dreadfully modern effect is not what we want… No building should be taller than the tallest tree.”

Others at the meeting spoke up about their excitement for the development and what it will do for the city.

Leo Fante owns Fante’s Coffee, which sits at the corner of Grinstead Drive and Etley Avenue. Fante is hopeful he would be able to move his business into the new development.

“As much as we love the little cottage house — it’s got so much character — but the new development is just, we feel, the future,” Fante said.

The group behind the development said they want it to be more of a pedestrian neighborhood that would connect better to Cherokee Park, which is right across the street.