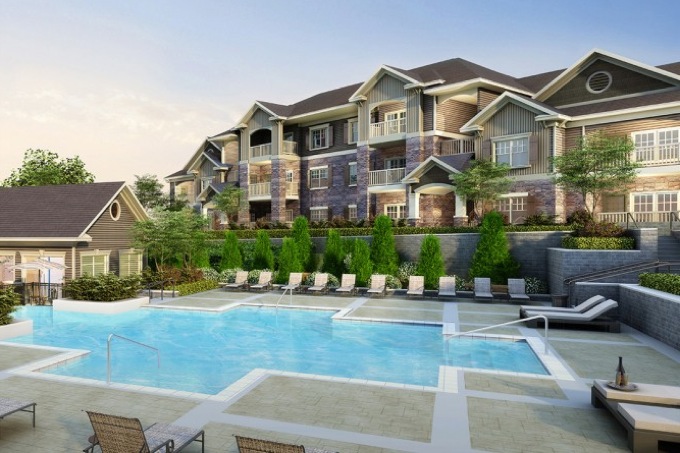 Claiborne Crossing is the combined effort of Jefferson Development Group and TDK Construction.

Kevin Cogan and Kent Ayer became friends and development partners through one random phone call. Ayer, president of Murfreesboro, Tenn.-based TDK Construction, decided he wanted to break into the Louisville market in 2008 and set out to find the perfect place to build a dream apartment building. So when he happened upon an undeveloped plot of land, he called the owner to try and buy part of it.

Cogan, CEO of Jefferson Development Group, was on the receiving end of that call. “I didn’t even know who he was,” Ayer says of Cogan. “I had just dialed the number on the sign I saw and I talked to him on the phone. I was just trying to find a piece of property.”

But Cogan had a dream of his own and had already had a portion of the 100-acre property parceled out and zoned for an apartment building.
“We were determined to do the development on our own,” he says. “But after talking to TDK and seeing what they could do, we realized what they brought to the table was a remarkable deal of experience on the construction side.”

After an initial meeting, it was clear Ayer’s company would come together with Cogan’s Louisville-based team to mash together their visions and create something spectacular.

“We thought the demographics of this area are extremely on the high end,” Cogan says. “We wanted to create a unique product. A product that was the very pinnacle of the quality and brand for this market and at the end of the day, our sense proved to be correct. It’s beautiful and equipped with A-plus finishes.”

The result of the collaboration is Claiborne Crossing, a 242-unit luxury, Class-A community located on the east side of Louisville.
The community is composed of 48 one bedroom units, 158 two bedrooms and 36 three bedroom units. The units feature sprawling layouts with the largest 3-bedroom coming in at more than 1,500 square feet.

“We looked at this with a lot of Boomers in mind,” Ayer says. “It’s in the one of the most affluent areas of Louisville and we wanted to have a condo-type product that was maintenance-free.”

Crown molding, sun-rooms and a high-end dog park are some of the amenities that make the community feel more high-end, Cogan says. Some units are even equipped with wine refrigerators.

And the specialized finishes certainly make the new product stand out from the crowd. The average rent at Claiborne Crossing is $1,240, while Louisville’s average rent in the first quarter of this year was $793 per month, according to a Hendricks-Berkadia report. The report, released by the Phoenix-based advisory firm, noted the figure was a 2.3 percent average rent increase compared to year before. .
Leasing has started although construction isn’t scheduled to be completely finished until May. In fact, 36 units were leased in April, and new potential residents are coming in every day, Cogan says.

“When you visit our office on a Wednesday afternoon or a Saturday morning, the office is just buzzing,” he says. “I enjoy meeting with the prospective residents. When they tour the facilities, the grounds, the amenities, they say it’s just as nice as any condo development and when you get that kind of feedback from the residents, you know you have done something right.”