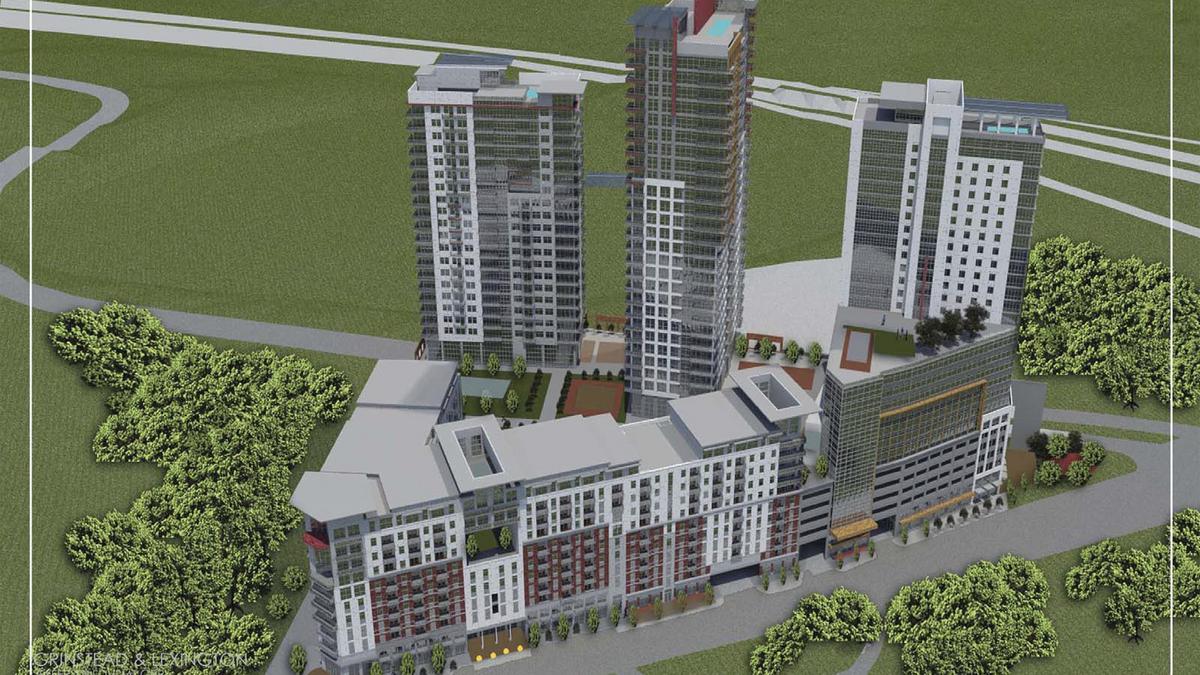 The Cherokee Triangle Association has found itself on the opposing side of Louisville developer Kevin Cogan in the past, challenging his Willow Grande condominium high-rise in front of the city and in front of a judge.

But the association’s incoming president John Elgin told me that he and others within the association are cautiously hopeful that some compromises could be found on a proposed 35-story high-rise bounded by Lexington Road, Grinstead Drive and Etley Avenue.

Cogan’s project, as proposed, would include a hotel with about 250 rooms, more than 700 apartments, retail and office space.

Cogan’s company, Jefferson Development Group, unveiled a rendering and early design plans for the project during a series of design workshops in June at Louisville Collegiate School. There, company officials heard directly from residents surrounding the project and said revisions will be made based on the feedback.

The total square footage was not disclosed during the design workshop I attended, but initial estimates show the project would include 100,000 square feet or more of office space and at least 50,000 square feet of retail space, much of which would be at street level. The cost has been projected to be at least $200 million.

Elgin said concerns surround the project, including its height, density and its expected impact on traffic.

“The density is going to cause an issue at that junction,” Elgin told me Friday, pointing out that the triangle is close to Interstate 64 and moves have been made to reduce traffic flow there, including talks of bike lanes.

Elgin said he’s not sure how Jefferson Development Group could promise traffic reductions, especially on Etley, which could end up being the main entrance of the development.

“Frankly, you really can’t plan that,” he said of traffic. “It doesn’t seem to work downtown.”

And he’s also not sure the block can accommodate the density, noting the Omni Louisville Hotel has fewer stories but more acreage to work with downtown.

But Elgin said he believes Cogan can develop an attractive venue there. It just needs to be compatible with other neighborhood uses and the community needs to be involved early in the process.

“I think there (is) some real opportunity to build a very attractive building or set of buildings that can be an integral part of the surrounding community,” he said.

Cogan and his company have declined comment on the project now that it’s working through the early design stages, but Louisville attorney Bill Bardenwerper, who represents Jefferson Development, has promised changes to the project.

Though the Cherokee Triangle Association previously filed litigation to block the Willow Grande project, Elgin said the association will hold its judgment on this development until revisions are made, though he wants to see some reductions in height and increased building setbacks.

He also hopes for more open communication this time around, noting residents were caught off-guard by the size of the project because there was no warning or input before the workshops were held.

“You catch someone by surprise, it’s hard to focus on the pertinent issues when you’re becoming familiar with the process,” he said.

Cogan’s Lexington Road project was the subject of Friday’s cover story in our weekly edition, in which several real estate veterans praised Jefferson Development Group’s big vision to transform that corner. You can read that story here. You also can check out how two of Cogan’s projects compare to other large Louisville developments here.